The party returned to the Outcast Armory to finish up additional business with Grundic. Belferon negotiated a price for a masterwork suit of chain mail and made a down payment. Jerrik located and purchased a masterwork suit of studded leather. The armor was lighter and stronger than standard studded. Shard and Belferon each have active contracts with Grundic with delivery promised in 6 days.

The decision was made to stay at the Bleeding Sword in the Garden District. They had a few drinks, did some gambling and came out slightly ahead as the odds were in the players favor. The next morning the party left the Garden District and headed south looking for a port area known as Shanty Town. 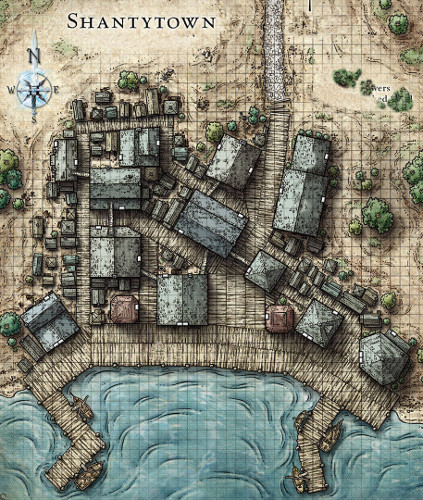 Shanty town is located on the shores of Lake Veyona and was built using materials left over from the war. This gives the entire town a grim, aged, and dilapidated look. The area is crowded with merchants, traders, refugees, deserters, brigands, sailors and a host of tradesman all packed into a few acres of land.

As the party moved through Shanty Town, Jerrik picked up Thieves Cant rhyming and signaling in the crowd indicating the party was being targeted for an ambushed near the dock area.

A number individuals in the crowd had top hats and traveled in groups of 2 or 3. A quick stop in an inn allowed for a cool drink and some discussion with the inn keeper.

Our business was with the dock master and harbor union if we wanted to find Tobbar the captain of the Dire Gar. A few quick moves near the docks and Horimato found that his medallion of inspiration was missing. It happened lightning fast with a high level of skill.

A passerby let Horimato know that a “deal could be made”. Horimato followed and pressed the informant for information only to find out he was paid a few coppers to deliver the message. The deal would need to take place with Brack Snagtooth in the harbor union building.

Brack is rough sailor, ship builder, and owns the Shanty Town docks. He is in possession of Horimato’s medallion of inspiration and is negotiating a deal with the party.  Tobbar owes 30 gold in taxes and duty before his ship will be released. Brack is also interested in having the party take on an important task.